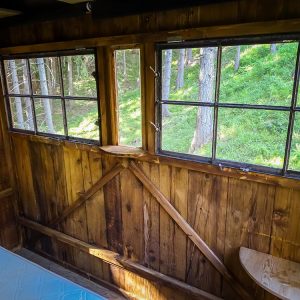 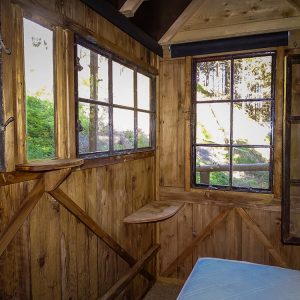 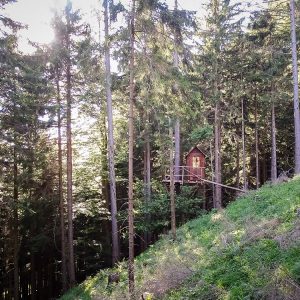 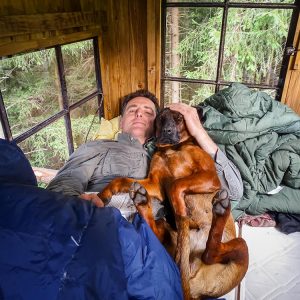 My hunting fellow Andreas and I had chosen a clearing within a steep forest part at the border to the rutting grounds for the realization of our small hunting box. In order to hunt in this part of the hunting grounds, you need to accomplish a longer hiking tour, whereby, however, the game is often scared off and notified of one’s presence, especially when deerstalking already before dawn. For this reason, the hunting box we planned should also be usable for staying the night so that one could already be on site before dawn, without being noticed.

When the snow situation enabled the construction of a platform in March for the very first time, we spent two days for the construction thereof using spruce and larch wood rods, which we lumbered in the surrounding thickets.

Subsequently, however, a late winter revival made sure that it was June when we were finally able to position the box, which had been prepared in my workshop studio, together with Tobias from Salzburg onto the platform. With the neighbouring forestry administration we applied for the permission to use the nearby forest road for delivery purposes. In co-operation with the helpful forest manager Christoph, our friend and senior hunter Martin, his wife Anita and our friend and land owner Alois, we hauled the prefabricated components from the end of the forest road to the site underneath the platform. In this way, there was developed, rather fortunately, a wonderful stalking track.

The small box is composed of very old pine boards, which, due to the weathered surface thereof, inconspicuously integrated themselves into the idyllic forest atmosphere. As a roof, we used black plywood boards. The six windows offer a perfect panorama view, creating the feeling of being in a gondola. Via a six metres high rung ladder, it is possible to climb from the trunk of the larch from the bottom behind the box up onto the little terrace, in a rather covered way. For our hunting dogs, we created a narrow bridge on the side of the hill so that we do not have to cumbersomely and dangerously drag them up across the ladder.